What started out as giving friends haircuts in high school ended with a successful barbering career. From a student, to service-industry worker, to full-time barber, Willie Sells, the owner of Tee’s Barbershop, has cut hair and fostered a sense of community for almost six decades in Tulsa’s Greenwood District.

A barber and his place in Greenwood

An inherited barbershop and 57 years later, Willie Sells finds himself caring for his community almost every day.

Sells, 77, owns Tee’s Barbershop in Tulsa’s Greenwood district, and his shop has flourished as a Black-owned business since 1985. The years leading up to this successful barbershop is what makes its existence important.

“I’ve been cutting hair actually 57 years,” Sells said. “And that’s not counting my high school when I had to cut my friends hair in school.”

Before working in Tulsa, Sells lived in Tullahassee, the oldest all-Black town in Oklahoma. From there, he started his hair-cutting journey once he attended barber college in Tyler, Texas, in 1962. He received his barbering certificate and became a certified barber in Tulsa the next year. Although he moved forward in pursuing a career as a barber, he said it had its ups and downs.

“Barbering is no joke,” Sells said. “People think it’s just easy and like falling off a log, but you need to learn about it in order to take care of your people.”

In addition to Sells’ appreciation for cutting hair correctly, he effortlessly curates a safe environment in his business where Black people can gather.

There is a sense of warmth in the four walls that surround Sells’ craft of cutting hair. When his shop is open during the day, it fills with members of the community who have known Sells for years.

“I’ve got some customers that go all the way back to the ‘60s,” Sells said. “Not many of them, but a few, and I look forward to … I know one day they’ll stop in. It’s never a dull day because you never know what will happen.”

It is clear that when Sells’ clients come in, they are happy to sit and talk while waiting for their haircuts. Some even peak their heads in to chat for a second, say hello or bring food.

“We call this a million dollar square that was renovated,” Sells said. “As you can see, we wore out in 30 years, but thank God it’s still here.” 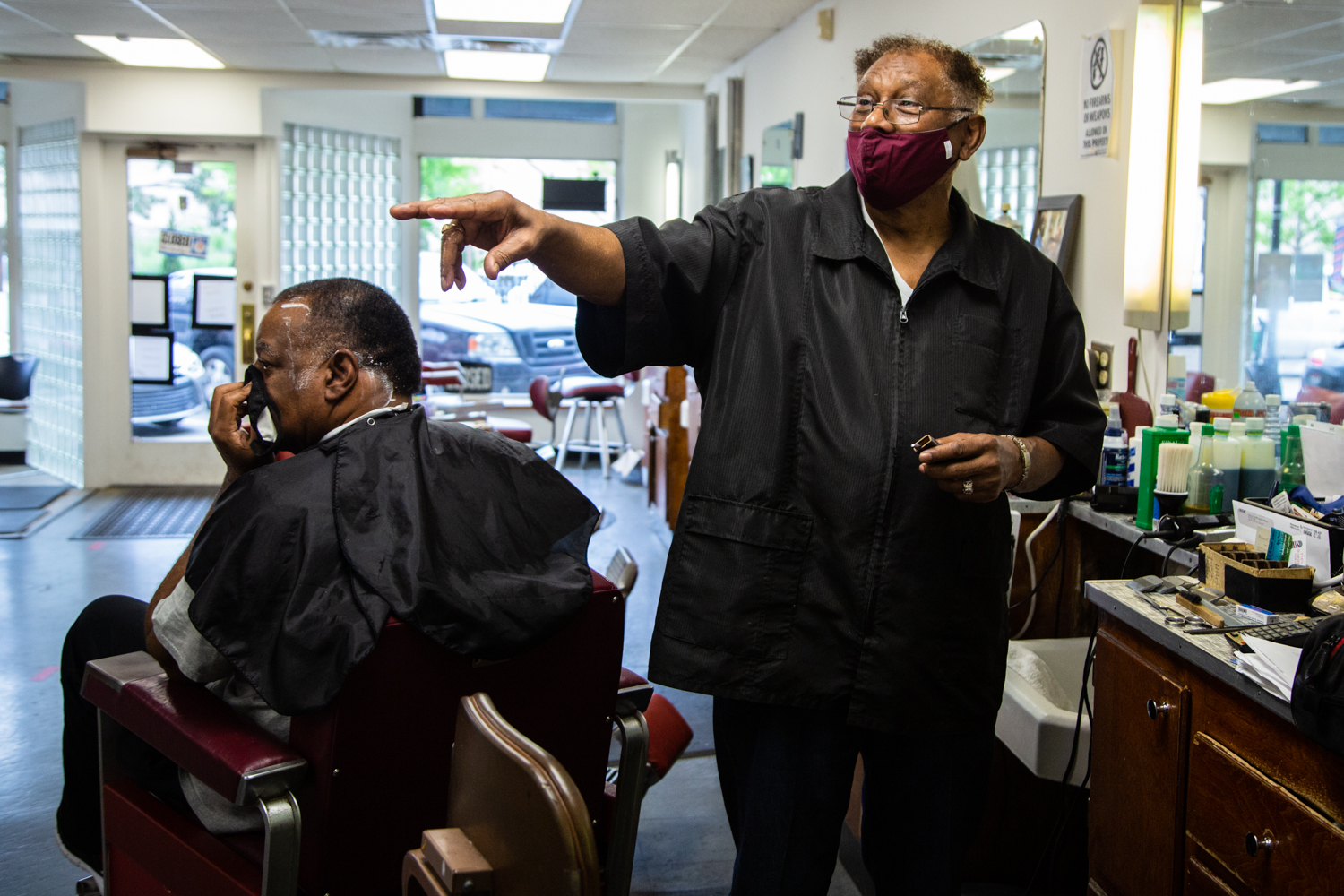 As he cuts a client’s hair, Willie Sells talks and laughs across the room to his good friend who’s dropping off donuts at the shop for the day. (Photo by Taryn Johnson)

Over the course of three decades, the stations in his shop have accumulated small mementos, and pictures of family, past barbers and clients. Sells also keeps a coffee pot and Keurig right next to his station for his daily coffee and tea. Sells says his shop is worn out, but some would say it is modest and comfortable.

Tee’s Barbershop was not always in the building it’s in now. The shop had to relocate in 1984 after the city of Tulsa declared eminent domain on office buildings on Black Wall Street.

Sells got his start at the shop’s original location in the 1000 block of North Greenwood. D.M. Mims, the original owner of Tee’s Barbershop, accepted Sells as a barber, trained him and gave him a job. He cut hair at Mims Barbershop until William Tecumseh purchased it in the ‘70s. Tecumseh was Sells’ mentor, and he pushed for Sells to come with him when the barbershop had to relocate.

Sells’ start as a barber wasn’t always smooth. He got married and had four children, and he soon discovered simply cutting hair wasn’t enough to take care of his family.

While working for McDonnell Douglas Aircraft Company from 1965 to 1998, Sells continued to cut hair part time. Greenwood not only gave Sells an opportunity to cut hair, but it also helped him stay afloat financially.

Aside from helping him overcome his financial trials, Sells said he is grateful for Greenwood because of the people in it and the people who came before him.

He is a member of Mount Zion Baptist Church, and has been since the 1960’s. He pointed out why this church is so important to him.

“When I came to town as a youngster, they took me right in, and I’ve been here ever since,” Sells said. “I was able to raise my children and spiritually educate them, and which is a blessing, and so I appreciate the ones that stayed.”

The original Mount Zion was burned down in the Tulsa Race Massacre, but its members did what they could to rebuild it. Sells explained his forefathers suffered and still managed to rebuild. So to him, Black Wall Street is a holy ground.

Today, Tee’s Barbershop is open five days a week. The shop has shorter hours and has scaled down one staff member due to the COVID-19 pandemic.

“We got some future plans after Coronavirus is over,” Sells said. “I’ll probably stick around another four or five years as long as my health last[s].”

“The barbershop was a blessing to me,” Sells said. “Greenwood has been good not only to me, but to the community.” 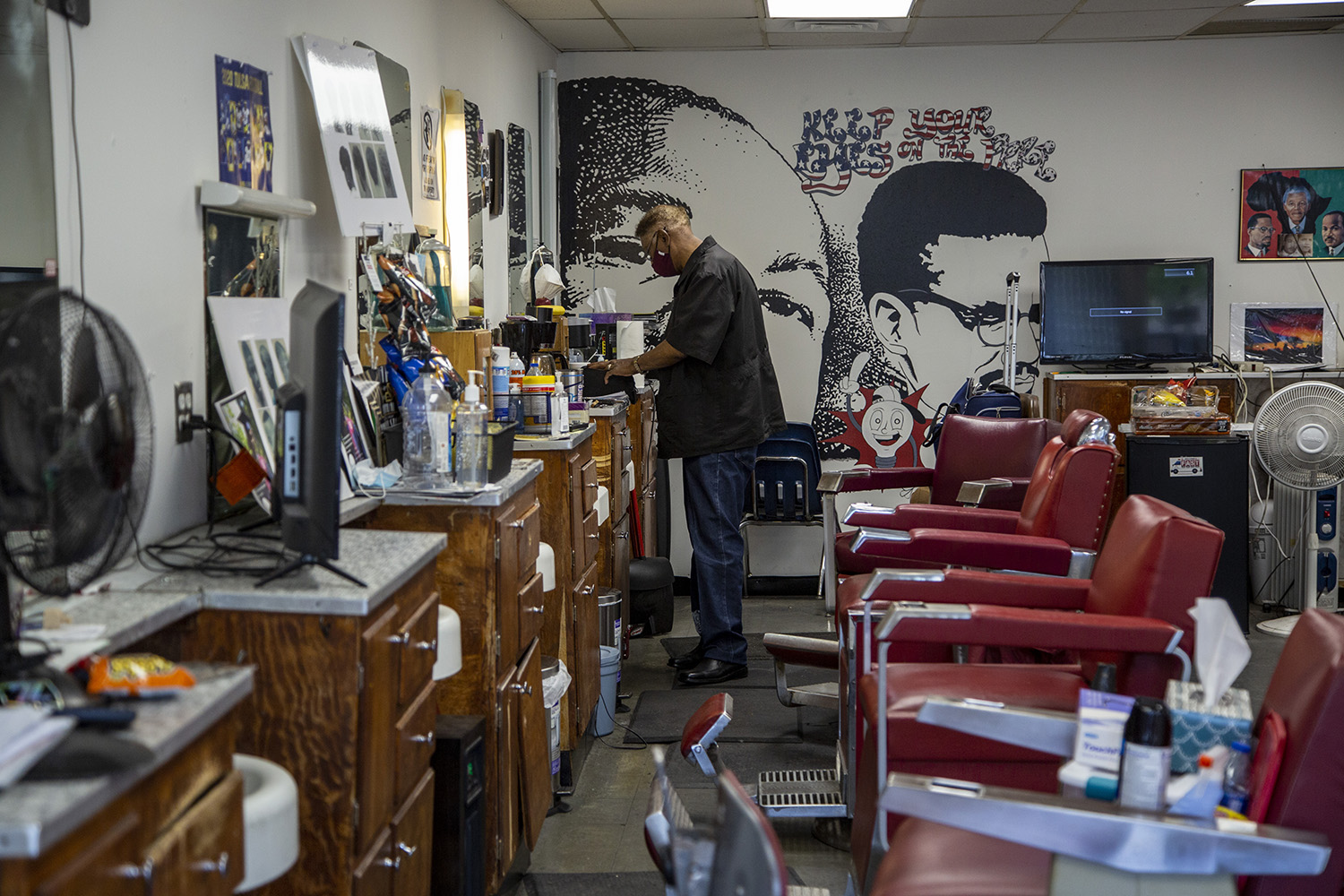 Willie Sells prepares his station for the day before he gives his first haircut. At this time, he often makes a cup of coffee or tea from the coffee pot or Keurig next to his station. (Photo by Taryn Johnson) 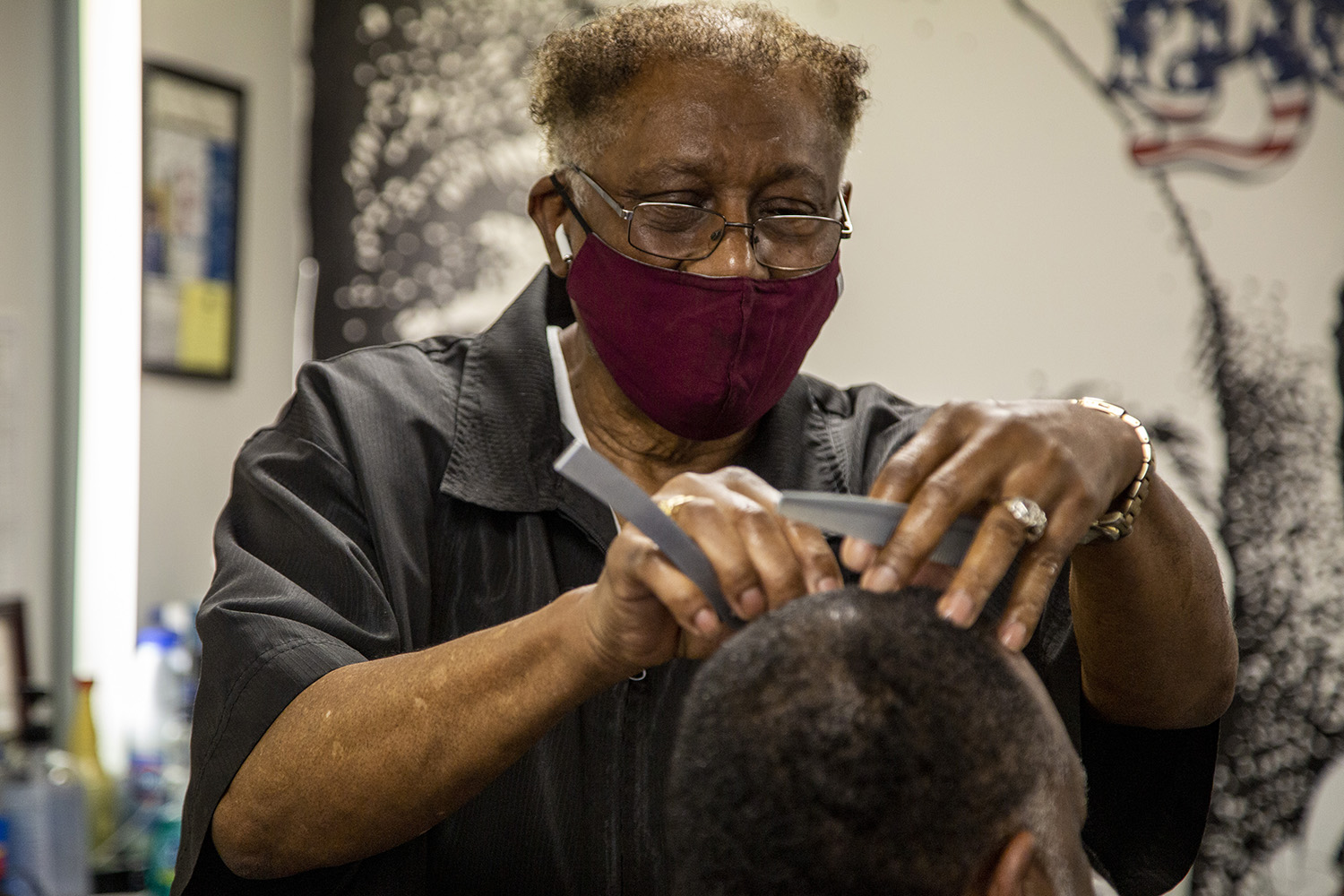 Willie Sells (left) uses a straight blade on his client Buddy Tate to finish up his haircut. (Photo by Taryn Johnson) 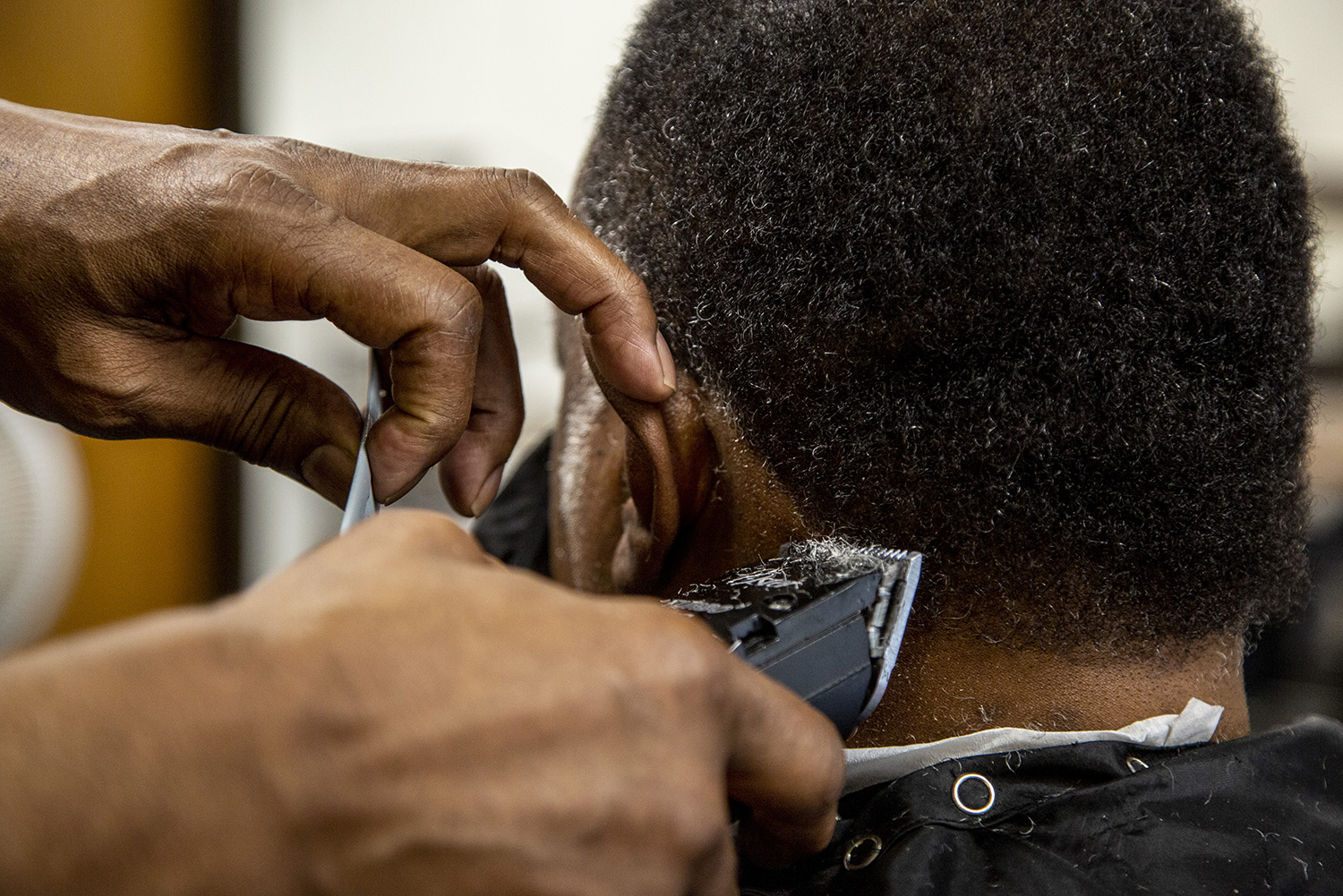 Willie Sells starts off his first appointment of the day with client Buddy Tate. Sells has cut Tate’s hair for years, and some of Sells’ loyal clients date back to the ‘60s. (Photo by Taryn Johnson) 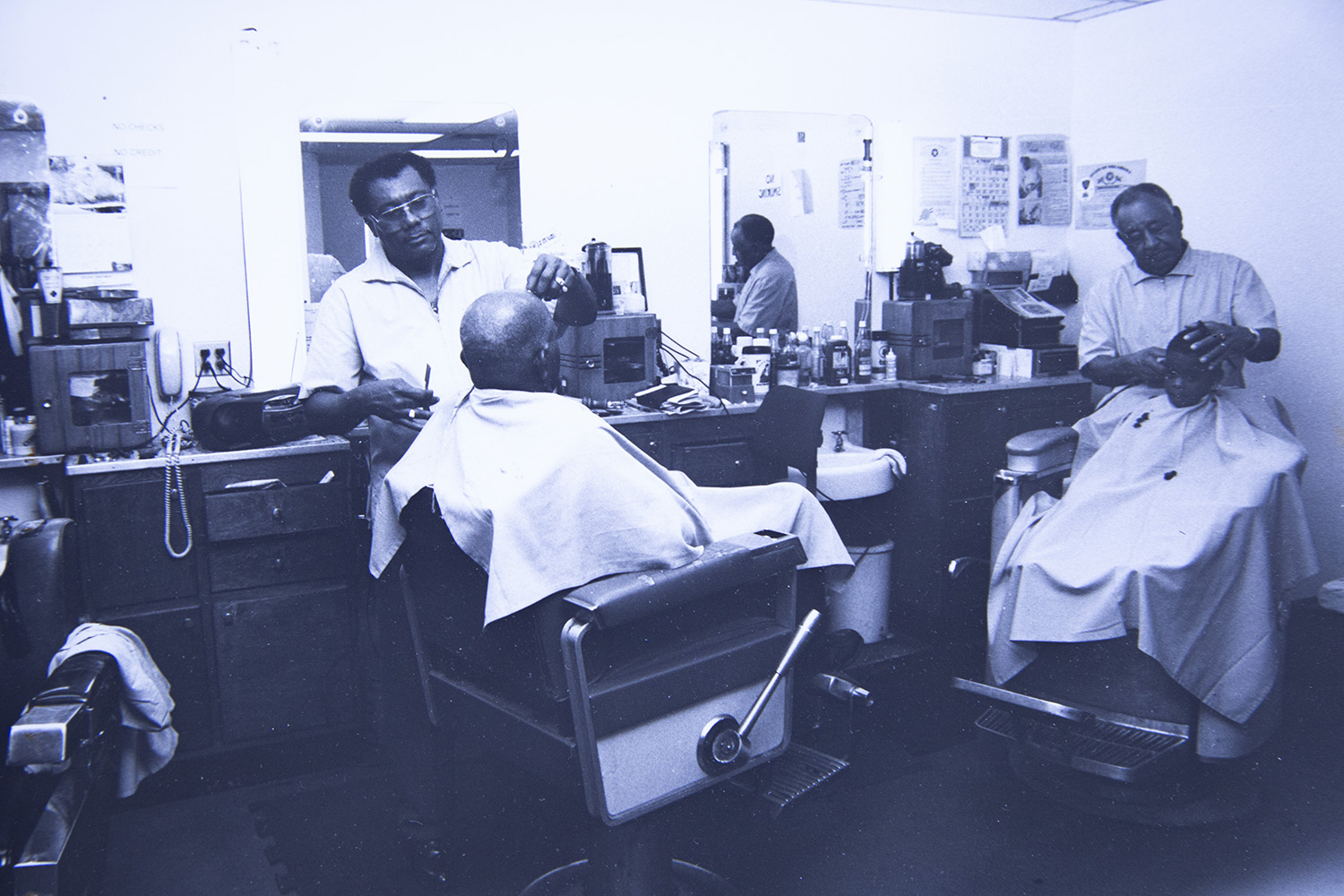 Willie Sells (left) cuts hair next to William Tecumseh (right) in Tee’s Barbershop when they worked together. Tecumseh was a mentor and father figure to Sells. (Photos Courtesy of Willie Sells) 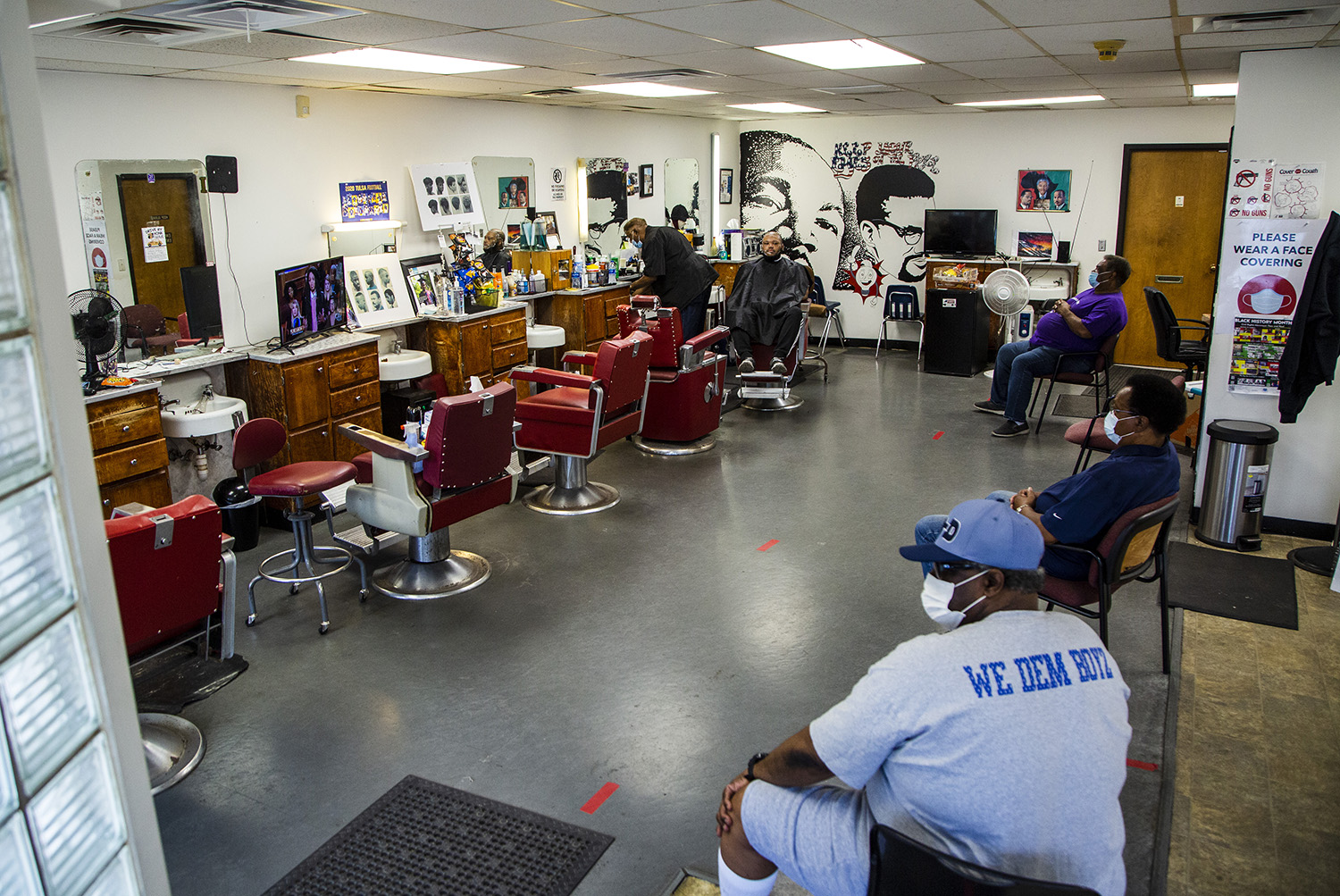