A week of personal and professional development

In one week, I learned more about digital reporting and storytelling than a textbook could’ve taught me. Although this program was remote, it was valuable and informative because every part of this experience required hands-on participation. I learned, made mistakes, and had a great time in the process only because of the amazing mentors and editors who led the program.

I learned how to use Adobe Audition. I went from not knowing that the program existed to creating and cutting an audio piece by myself in a day.  I also learned that the earlier I start my day, the more time I have to get things done. It sounds silly, but being a college student I appreciated the morning routine.

Of course I made a few mistakes along the way. One mistake I made was not relying on every member of the team. I was overwhelmed on Day 2, and instead of reaching out for help I tried to do things on my own, which made me even more anxious. After speaking with a few editors I realized that they wanted to help anywhere I needed it – and I mean ANYWHERE. It was refreshing to know that I had genuine support every step of the way with no harsh judgments. I have a hard time asking for help, but I learned quickly that nine times out of 10, people can and will help. I just have to ask.

This week was way busier than I expected. Before Monday, Doug Mitchell reiterated how busy we would be once the week began. I don’t think anyone took him seriously until the end of the first day. It felt like a full-time job, but much like a full-time job you have to love what you’re doing and the people you’re doing it with. I cannot be more thankful for my funny, chatty, and very intelligent mentor, Graham Brewer. He made everything fun and we related on so many levels. Everytime I spoke to him I learned something new and felt more confident in my project. I now have a mentor and friend going into the journalism world and I couldn’t be anymore grateful.

The 100th anniversary of the Tulsa Race Massacre is a subject I have been preparing to cover for the last year. This story of the Rev. Robert Turner is near and dear to my heart, and I am so humbled to be able to share it with NPR’s Next Generation Radio’s audience. The Vernon Chapel AME Church holds stories and artifacts that will continue to tell the significant history of Black Tulsa. The Rev. Turner works hard to preserve what is left of the church and I think he deserves this type of coverage. Thank you, Next Generation Radio, for shining a light on Tulsa during such a monumental time. This is a week I will never forget. 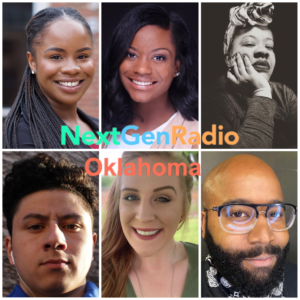